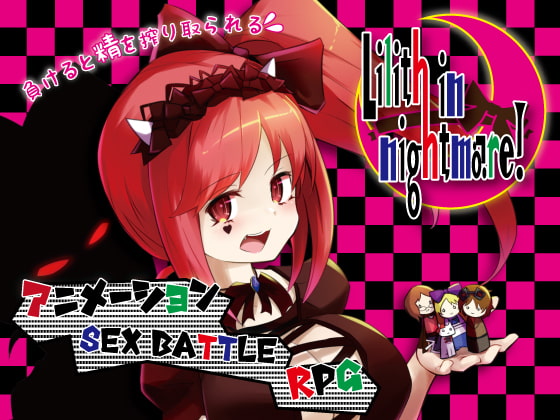 All H-conent are animated and each character have many different scenes/animations with different speeds. The characters here really hit the spot for me with my monster girls fetish. Every battle has a classic “defeat” scene you can watch when you lose. I have been satisfied with all H content in this game and none of them felt cheap or disappointing to me. Great stuff!

The game-play is mostly action based where you move around the map and fire ranged projectiles at mostly random spawning enemies. There is very few regular enemies that trigger classic turn based battle instead. Every chapters ends with a turn based battle also. I really like that there is not too much turn based battle or random encounters that trigger these kind of battles, it really helps the flow of the game in my opinion.

There is an interesting system where you can level up a party character by doing a H scene with them (Energy Drain I think it is called) by spending your own EXP. You can unlock more H scenes this way too. I would suggest trying to avoid doing this as much as possible until the last chapter of the game where you can level up easier 20 times faster or something. Leveling back up your character again in the early game can be long so it is better to wait for later.

Overall, I had a blast with this game and everything it had to offer. They will be adding more content with this game with future patches apparently too! I know I’m looking forward to it!

https://www.dlsite.com/ecchi-eng/work/=/product_id/RE246337.html do this next please

version 2.1 is available, anyone know where to get that?

Could you please update this to 3.1? It’s not a big update, but the translation will only run with this one now

Where can I find this translation file :O

As stated at the bottom of the post, the game was updated to 3.1 and so Fatalus will continue to work on that version only.

I located a partial translation thats being done .the guys using a machine translation to fully translate the game.curently up to chapter 8. Here is the link : https://ulmf.org/threads/sa_kurutekua-circle-tekua-ririsuinnaitomea-lilith-in-nightmare.13983/

version 4.0 has been released as of December 25th, was wondering if/when that plans to get released here.

Hopefully soon! What did they change with the new update?

Does anyone have a save file? pretty stuck and cba to grind. plus how do u access replay mode?

How do you get past chapter 6-1? I walked around the entire map and theres nothing except alice at the bottom who says the same thing all the time

Translator++ seems to break spawn scripts on a few maps.
6-1 is completed by beating 5 of the girl enemies on that map and then talking to Alice.
You can try loading your save into an unaltered version of the game.

Can someone please tell me what I can get to machine translate this game, if possible?

You’ll need something called “enigmavbunpacker” and “translator++” to machine translate this.

I got the translation, but couldn’t patch it into the game. How did you do it?

Hi there,
does somebody know how to pass chapter 3.1
i think i need to type in a code in the safe.

No, there is one room with a golden circle indicator that you need to get to and it’s closed, room 106 I believe. You need check out lots of stuff and try to find keys to progress the map. One was in the toilet and one was in a wardrobe I think.

3rd key one is the cabinet in room 102 (around the top left of the map, you can press Z on the little word boards on each room to know which number they are)
BUT you can only get it after you read the paper that says room 102 in the office. The paper is in the office in front of the main hall. To get there, find the restrooms, go up, then hug the wall left once you reach the first hallway you see. You usually miss the entrance because of the angle you travel towards it. You have to have all the other keys first, and its usually this room that you miss. (make sure to have already tested all the other locked doors before and after this part, I dont remember it exactly)

:(( i cant find the wardrobe

Is this the latest update? I hope you can update this if not. The recollection room only exists on the 1.2 i think :((

How do you get past chapter 9-2?
Both dialogue options end in the same game over for me, and it won’t let me leave the building.

My mistake! I was skipping through a dialogue option by accident.

Any chance you could put the download into a Mega file? Google dr. isn’t downloading 🙁

You will need to get eight merchants dreams. I only have seven so far, so I don’t know where I could find the final eight.

Can anyone make a list of the merchant fragment locations? You need eight to get the mermaid fishing event but i only have seven and cant for the life of me find the eigth.

THANK YOU! I had missed it at 4-2. I was scared that I had somehow fed it to the dream eater.

Can someone please Tell me the password in chapter 3-1? I’m having problems to know it.

The code for the safe is 2

Your Dad Who Went To Go Get Milk