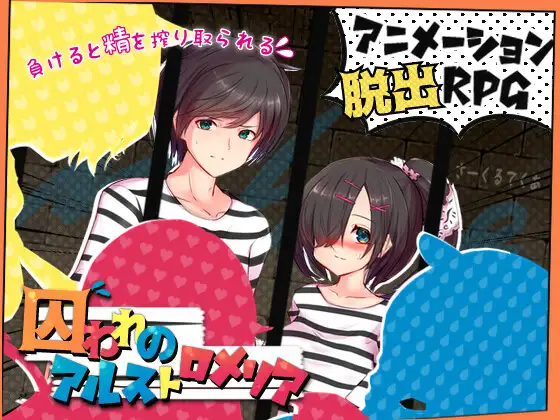 A large mansion surrounded by mist sits quietly in the forest. Succubus hunter Ares and Romelia set out to exterminate the demons that live there. However, they are easily defeated and trapped in their dungeon. They are given a chance to escape the mansion but if they get caught, they will be milked over and over! Will they be able to return safely, or will they be squeezed to death?

About the translation: This game was encrypted with a software called Enigma, protecting the files from being accessed through my translation tool. I was able to get past that part thankfully, but the game is littered with a crap ton of scripts, making it so easy to break.

Check it out and let me know if it’s worth it to do these sorts of things. Only did this once before… If you like it, I might go through and polish it some more 🙂

– Teleporting to the wrong room behind the fireplace ( Still broken)

Thankfully, the room it’s supposed to teleport you to is not that important. Does not affect the progression to the story.

The English translation caused the “hook shot” item to break, which stops you from progressing through the story at a certain point. Thankfully, a user in the comments created a work-around for this issue. There are a bunch of blue chairs on the second floor, that allow you to swing onto the chandelier, without the hookshot item.

Hemdom, if u read this (or anyone really), I fixed the Chandelier issue with Hookshot in Eng release. Here is the file for the modified Map (to be placed in the “www/data” folder:
https://mega.nz/folder/fvAVkQYQ#5U7HRIyREeVyOmrQX4EFmw
If u want, u can add this fix to your download as well on this site.

Pinning this so others can see… For those who are having trouble applying this, just redownload the game. I’ve updated the links.

To add to what he’s saying, it doesn’t fix the hook shot item itself. Instead adds chairs, that teleport you to the chandelier. Thank you for adding this work-around Jake! 💖

Man I love you, you just saved my evening. I love Lilith in the Nightmare so hyped about this one!

You’re a fucking saint you know that?

Am i the only one who gets extremely low fps when an animation plays?

What are your specs?

I’m using a netbook btw, and a pretty shitty one too and also also my knowledge about pc’s is rather small so sorry if i gave you too little info to work with

Hmmm most likely its your ram.

I actually can’t finish the quick time events, the animations slows the game to a ridiculous degree. I’m not playing in the best of PC’s but I can handle way more powerfull animations than this.

nope, you ain’t the only one fam.

Hey there, the game isn’t bugged for me (just the the fireplace opening is not leading where it needs to, but alll you would find there is a letter and an elexir nothing relevant to the story). I finished every ending with the english version. I was stuck as well, when i had to get the grabling hook. To get that you just need to got to the bathing house. At the entrance door to the left you can find a luxus key to enter the owners zone on the second floor (red black carpet). Inside, when you head to the top you can find a speer (sharp thingy). If you craft it together with the rope from the dark room you got it.

Might be, the first time I was looking around i just found sinas panties (no luxus key) in the bathing room, so that might be a bug, when you try to collect the luxus key at the entrance door to the right AFTER the bathing event. If there are still problems with progressing you can activate the hint settings in at the book in the basement prison (would recommend doiing that at a fresh start, sice it shows you hints interdependently of your already progressed objectives).

How did you use the grappling hook on the chandeliers?

i attack in their direction. If it does not work for you could also use a little trick.
In retrospect you just need the grabhook to get to the libary on the second floor. There is a hand mirror item in your bag for debugging.Just Stand on the left wing second floor (where the chests are). Choose handmirror as item. Chose second option from above to set one step down and repeat till you are through (you just need that hook to get to libary anyway). When you are done in the libary just get yourself raped to teleport back.

I might be dumb, how do you craft the hook? I got both the spear tip and the rope but I don’t know how to actually combine them

there is some kind of crafting bench on the first floor (a room with a table). The door leading to it has no keyhole so…

attack it till the door breaks to enter the room go to the table and interact with the box on the table.

Oh my god I thought I had to find a key to open that one, thank you

New version has been released, please update. Thanks.

Zero
Reply to  Some guy

Same for me. I’m guessing this bug makes it unfinishable in the current state. Because i have 2 dead ends with the chandeliers on which i can’t use hooks and room behind electronic door and i’m guessing electronic weapon is in the dark room on the left.

So I have been playing for 6 hours just to find out the game is glitched and can’t get much further.. I was trying to beat the game lol.

No idea if it’s just me, but I can’t get the ending where you lose all of your sanity points? I think that’s how it’s supposed to be called. When I lose them nothing happens and I think getting to 0 points should trigger the ending. Playing the mtl version so maybe that’s why.

you need to be in the minus sanity. So if you have 0 or 2, instead of 1 sanity this event will not be triggered. You can eat sweets with your partner to get your sanity up on 1 sanity. Could be, because of the translation (even if i dont think so), but if it isn’t, some work on the code needs to be done, but I think they will.

I used the debugging tool a bit and turns out the electric weapon is in the library behind the rubble, not sure exactly how you’re even supposed to destroy it but you can get out of it since the rubble is replaced with a gate you can destroy using the weapon you just got

Does anyone know how to climb the chandeliers? I’m a bit stuck after leaving Sina’s room.

Great game, btw. The best in a long while i would say. Great translation, Hemdom, especially the parts that you polished. The only part that’s a little bummer is that there is not much art here really, it’s mostly variations of the same stuff. But the quality of it is good.

Were you able to do the fireplace part also?

where is chandeliers part start? hint not helped

Holy cow, the game came out like a week ago. I’m genuinely impressed you already got a MTL up.

Standard MTL is easy bro. There’s translator apps that can automatically MTL games. I forgot the name. You just need to do a little work afterward.

So I’ve had a first look at the game and it looks amazing, LOVE IT!
But there is a little problem… every time there is a animated scene the game laggs and I cannot really progress because of that … didn’t happen in lillith in nightmare (not that much)
buuut it doesn’t hurt that much to see these spicy defeat scenes (even if not very fluid), I’d do love to progress in the story tho… thanks in advance 🙂

As soon as an animation starts playing my fps dies, My pc ain’t even bad bruh..

Is there anyway I can make this game run a little smoother to reduce the frame drops? I see there’s a ton of options but most are in Japanese

Any chance of getting the updated version once all the updates finish rolling out? V2.0 already seems to have a lot of new content based on the dlsite page

Please update it to newer version (if u can)

Nice, thanks for your work!

awww yeas
I didn’t even know they were making another game
thank you, Hemdom and happy new year

This guy is probably my favorite creator, so i fully appreciate your effort in translating his games. Thank you very much!