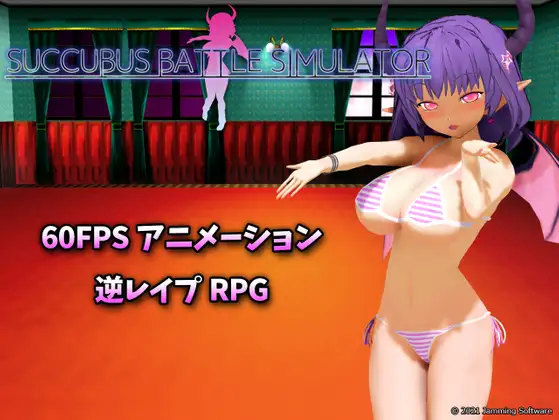 You play as a guy who is stuck in a massive mansion with a bunch of succubi and monster girls trying to drain your soul! There doesn’t seem to be an exit to the building, the only way to go is up. On each floor you climb, different enemies will be introduced. There is a tough boss battle on the top floor, so make sure to level up before you challenge her!

Update to the MTL: The one I uploaded before was a mess. I tried to do a quick and easy MTL, but it didn’t work for this game. I’m a big fan of this developer, and I wanted us to have the best experience. So I took on the task of fixing all the bugs.

Translating everything at once was not an option. I had to go through each line, making sure nothing would break. Along the way, I didn’t like the way the machine translations would sound… so I went back and edited them. It’s not perfect, but much better than before.

Until we get an official translation from the developer or a dedicated fan that knows Japanese, we will have to make do with this. Hope you enjoy it ♥

And thank God for that
Now time to learn japanese

I’ve given up after knowing how many characters (letters) they had with Kanji so I wish you good luck!

After you beat the last girl, you can keep going through the curtain behind the throne, that will lead you to a recollection room.
Just saying because i only found that out in my 2nd run

the animations are all buggy and green… how do i fix this?

how do i do this?

This was a question you could’ve googled, but you find the .exe (executable) file of the game in the directory you downloaded the game to, right click it, choose “properties”, switch to the “compatibility” tab at the top, check “Run this program in compatibility mode for:” and choose Windows 7.

The goblin man
Reply to  icantthinkofaname

Ultimate Fighting Girl is a good one, they have a TON of headscissor locks but you don’t die you just lose. It’s worth a play.

Agreed with Dur-De-Dur on Ultimate Fighting Girl being the gold standard. Another game I would suggest is Tower of Trample. It has some headscissor scenes and a couple of death scenes (Sadly not Headsissor related tho).

you’re a legend! this genre is probably my favorite. Masochistic male bully classroom, succubus maze and that one maid one are all amazing. Thank you for putting in the extra work with the mtl. It gives us all a chance to experience these great games and actually understand what’s going on.

I loved this game. I had so much to do today, but I irresponsibly set everything aside for this game. Great game IMO. Not too long, not too difficult. You can even play around with the setting of the enemies if you want to to make the game harder by buying certain items (you’ll see). The animations are a lot better than this developers’ previous title. This one just felt really good. 10/10

nw_elf.dll always gone how to fix it ?

For those of you who use a Windows VM like me, and are wondering why your sexy succubus game needs your browser to support WebGL in order to function, here’s how to fix that.

In package.json, under “chromium-args”, edit the line to read the following:

Hopefully that works on its own, but if not, following the steps listed here to ensure WebGL is enabled couldn’t hurt:
https://www.interplaylearning.com/en/help/how-to-enable-webgl-in-chrome

Note: It’s a double hyphen before each of the args, this font just doesn’t show it very well.

Odd. This is new, right? Why is there no news of Succubus Labirynth then? It’s been so long since release notice has been taken down. Couldn’t find any social media of Jamming Software either.

If someone doesn’t know the room password it is 5219

Ah, nvm. You have to set Compatibility to Windows 7

Very good.
Some of the places where you go from one screen to another are hard to hit.
Where the passage way is wide, you can get through them by approaching the center of the path on an angle. Of course this doesn’t work on the narrow passages.

I’m just gonna make a huge folder with gigs worth of these games for fun.

Today i discovered you guys, uff finally a place where i can share my tastes

Welcome to the community newcomer. You are going to like it here 🙂