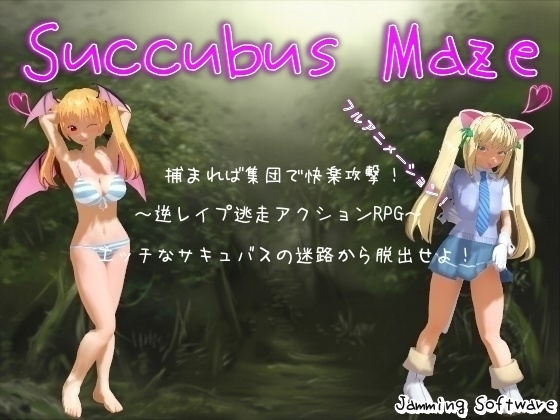 The story of the game is pretty simple: you go to bed and are stuck in a succubus world – a nightmare! It’s an RPG but the fighting system is pretty unique. If the succubi catch you, there is no violence. It just goes straight into a sex scene. Mash buttons to escape… or don’t, I wouldn’t blame you! This type of fighting style can actually be seen newer games like Milking Farm. Highly reccomend it if you haven’t played!

Specific fetishes include reverse rape, drained life force, and masochist situations. Ecchi scenes include: breast sex, foot job, 69, girl on top, gang bangs and so much more! There are over 50 dungeon floors, over 100 animations and ecchi scenes and 3d animation.

Sounds good right? Well… it is! And once you’re done playing, I have some good news for ya.

After 6 years no updates, the developer announces that he’s working on a new game called: サキュバスラビリンス
Wtf does it say you ask? I have no idea (lmao) but it’s about time. If you liked playing this game, keep your eye out for this one because it looks fantastic.

I keep getting an error, “RGSS202J.dll could not be found” when I try to start the game. Any thoughts on how to fix it?

The demo for the new game is pretty fantastic I have to say. Looking forward to it.

The title for the new game translates to Succubus Labyrinth

NICE! I loved this one so much that I was bummed out that the developer hasn’t released any other game since then. Can’t wait.

i get an “RPGVX RTP followed by some Japanese text” error when i try and run the Game.exe

How do you access the “recollection room” after beating the game?

Start a new game and you will have a book in your inventory.Use it.

Thank you, the issue was I had quit the game between beating it and starting a new game. Since it doesn’t save, just had to do the ending again and then hit new game.

Translation of the game on Google. My text capture also translates. Plus, the phrases do not work during the capture. The Subbuses just don’t talk. When they can sort of tease the player during the action. It’s better to play the normal Japanese version than this bony translation.

its say RGSS202J.dll could not be found when i run game.