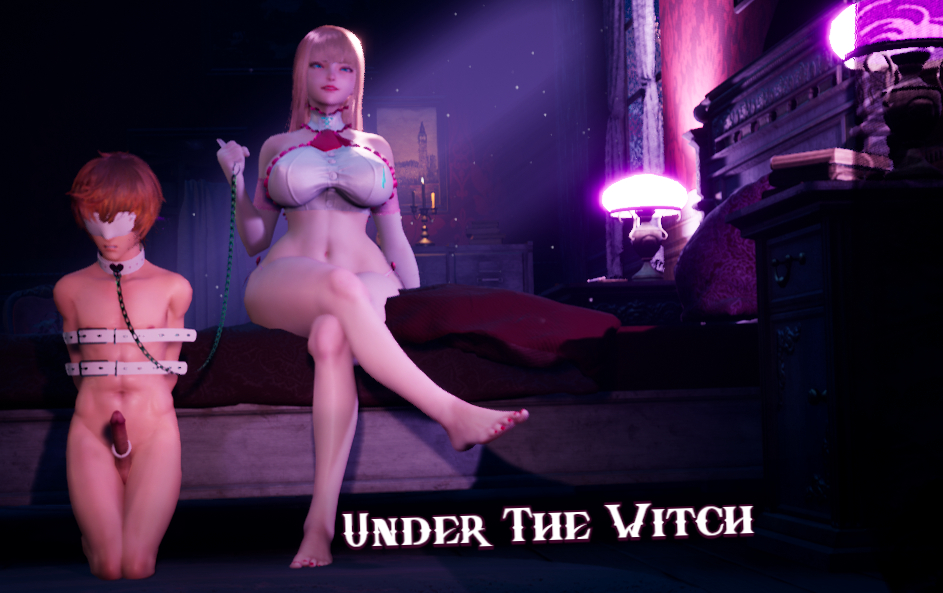 There is a witch in the forest, and she’s up to no good. In order to bring peace back to the kingdom, she must be defeated. Our protagonist is a young warrior who is assigned to exterminate her, but it doesn’t go as planned. During their battle, the witch throws him off guard with seduction attacks, causing him to lose. Luckily, his older sister was nearby and saved him.

Although he is thankful, he is too embarrassed to show appreciation. Instead, he reminds her that it is his task to defeat the witch and that she should get lost… but she wouldn’t leave! Apparently, their father gave her permission to assist in the execution of the witch. She will most likely take all the credit, as she is much stronger than him.

Our protagonist doesn’t like this one bit! He ends up challenging his sister to a duel. If he wins, he will fight the witch alone. If he loses, he has to obey all of his sister’s commands. I wonder who will win?

Update 0.2.0 #6: After losing to your older sister, you start to lose hope of ever defeating her. Thankfully, there is a merchant nearby, who has armor and potions to help turn the battle in your favor.

This update features a new female merchant, who can be found deep in a cave. She offers regular items, but you can also purchase 2 sexual services. There is another one that can be activated but requires you to steal from her shop.

A second duel with your sister has been added as well. There are a bunch of sexual attacks that happen during battle, and new defeat scenes when you lose.

*This update mainly focuses on the new characters. The previous version focuses on the witch. I recommend playing both games as they have their own exclusive content*

The game might start in Japanese but can be changed
Follow my tutorial to switch it to English!

PRECAUTION FOR LOW-END LAPTOPS/COMPUTERS
This game requires a decent graphics card and RAM in order to play, especially at high graphics settings. Make sure to go into settings and turn the graphics down, if you’re on the lower end.

Hemdom i want to start contributing to the website by like adding posts similar to the ones you add. Is there anyway that i can do that?

I wish you the best with joining the Hemdom team! More content is always appreciated.

I’m a pateron of this team and can say they deserve every penny.

hour of frost
Reply to  secretseed

I thought the creators abandon this project

This is the most beautiful eroge games I have ever seen.

Is the boobs smothering scene actually in the game? I’ve already played it but I didn’t see that scene

3 hours to go to download…. Do you have MEGA pro? Such dedication, i respecc

What are you on about? The download’s only 3 minutes

Can’t use MEGA and had to use mirror site which slows down my download considerably. Plus, Third world country net speed.
q-q

Have you tried using a VPN?

Oh thanks, I didn’t notice it

such a big hardware-hungry monster with so little gameplay. while the visuals are amazing like in the previous version (with dealer), that one at least had a full battle with leveling and all that. this one does not, it’s just a very one sided fight, a single scene and then it’s finished (apart from a handful of short scenes inside the gallery).
while it’s great that hemdom put it here, i was expecting a little more tbh.

ok, that annoyed me.
first step is press “tab”, last upper is “option”, language english, and after that are grafic changes easy.
should work for most of you
thank me later guys.😂🍻

i said nothing regarding the language, nor did i complain about the graphics (on the contrary). so not sure what annoyed you.
edit: ah, hardware-hungry must be it. it’s true though and a comparably huge file for…not much gameplay.

haven’t played it yet but i’m fairly certain the dev said he was focusing on getting a playable version out and he’s gonna add more moves in the coming months. shame that there isn’t as much content now but i guess we can look forward to more stuff

God, I wanna like this game. I love the models and animations so, so much, but the gameplay SUUUUCKS. I’m already not a big fan of the whole “lose one fight over and over and get trickle EXP/Gold until you win” structure, but since this game’s content seems like it takes a while to update, I can understand it, however this is done here the most boneheaded of all. The fight is so largely uninteresting, you have to be really lucky or having grinded up a great deal for anything interesting to happy during it other than her just smacking you down with Flash. The in between scenes, while largely not my thing, are very well animated, though that gets SHATTERED the moment you lose four times (largely inevitable.) Wanna fight her again and try to see more of the, you know, content? Go through this supremely unforgiving minigame that’s intentionally unfair, with absolutely no way to make it easier on yourself, and if you lose you either just force quit the game or sit through this REALLY long and boring lose sequence. That just flies in the face of the entire game’s structure.

do you have a save file? I DONT WANT TO PLAY THAT MINI GAME ANYMORE ='(

Did you download the update that nerfed the minigame?

no i just downloaded the version of hemdom

do you know were we can download it? Im getting crazy with that game

Wish I can help but I got mine from Patreon. Don’t know if the patch is found elsewhere.

Hi guys! do someone has a save file to go over the point with the mini game “scum challenge” this is too hard for me, I’m on that part since three days…

It’s hard to believe, but she is younger sister

There is a pattern to the fight. Also, there is a “just attack/guard” mechanic in the game—if you press Spacebar at the right moment (i.e., before an attack connects), you can increase your damage and block her attacks.

You can also bait out the potion snatch with the SP potion. Once she gets low on health, use the SP potion and she’ll steal that without increasing her HP.

Lastly, change the QTE hotkeys in the settings to a single key (e.g., all “D” or “S”) so you can spam that key whenever she goes for a grab attack.

YES HEMDOM YOU ARE A LEGEND!!!

Looks like my PC isn’t up to snuff. Whenever I enter a dark room or the merchant’s cave, all the characters on-screen are over-shaded, nothing like the screenshots. Tried reinstalling and changing a whole bunch of things in the graphics settings, but no dice. Unfortunately unplayable. I’m just assuming it’s due to the low specs of my laptop, but if someone recognizes a fix to my issue, by all means, let me know.

god the minigame is so painful…. is there any way to even win it? I hope they make it better just can’t win that

I’m on that point too, the “scum Challenge” is way too difficult, if someone has a save file pls share it

when will the update come

Y’all are talking about the fight being short and stuff. Me? I swam across the lake and wanted to see how far out of bounds I could go before getting bored. The answer is pretty dang far, spent at least half an hour trying to scale one mountain before realizing going down the side with the void has a much easier path up. You can clearly go farther but I didn’t feel like it. Video of how far I got here. Again, could go farther, but I got bored.

Umm am I the only one having trouble finding Alice for the first quest? I wake up get the quest to find her and she is nowhere. Her house is locked and I’m not sure what to do

If memory serves, try going into the unlocked house and interact with the bed. This changes the time of day, and she’ll sometimes appear. At least I think so.

Great game but not a lot of content as of right now. I only have a couple complaints. Mainly the fact that if you don’t have an insane amount of potions or high level from getting your ass handed to you by losing to your little (lol?) sister, you have to play this unforgiving mini game and the punishment for losing is basically you can’t fight her until you beat it. My other complaint is the lack of H-Scenes. I feel that if you lose a different way or day there should be a variety of scenes, but nope. Also a large portion of the H-Scenes are also footjobs, so imma pass this game to Dan Schneider. Besides your sister, Herba is the only other source of H-Scenes. The “lip” scene is ok. I thought I was in for the time of my life when I purchased the “ass” ticket, but nope. It’s just a fucking gross painfully long scene of mc being forced to devour her farts. I uninstalled and bleached my eyes right after seeing that.

One of the best i ever played , i wished there was more story and gameplay in it

Hey there’s a new alpha version available if you want to update the links.

The new update is still an early demo. There are only a couple of playable domination scenes of the new girl and no actual fight yet. The new version should have it’s own thread instead.