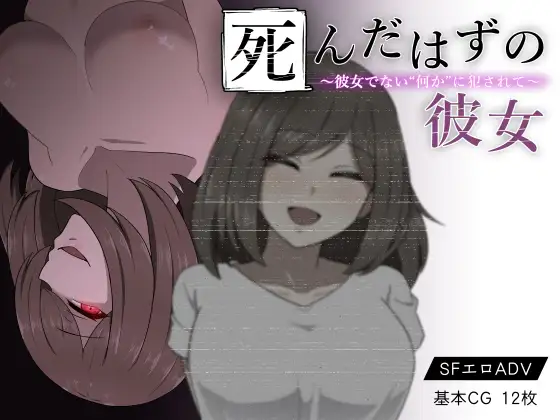 Our protagonist’s name is Shinya. He is trying to cope with the loss of his girlfriend Risa… but two years later, his friends (and even his girlfriend’s parents) have the illusion that “Risa is alive.” As if her death had never happened.

It surprisingly is true, but it’s not the same “Risa” that he once knew. There is something very off-putting about her, almost demonic. How could this happen? Who really is this person? Join him, as he tries his best to get to the bottom of this!

NOTE: I really enjoyed the story of this visual novel. However, there is no fan translation available. I took the time to edit the beginning of the MTL and even remove some annoying background noises. It’s not perfect, but the best we have for now.

The game has multiple endings. Once you make a choice, there is no going back. So make sure to save before choices, if you want to avoid the endings you don’t want.

Comes with full gallery unlocked
Load the 4th save file

gross, she fucks other dudes, right after the plot tells you she WON’T do that, then it lies to you and says it’s not important for the story and it is.

Kenny The Gigachad
Reply to  cool

Idk why you’re being downvoted unless you’re lying, if what you say is true the game is truly trash and not worth playing. Thanks for the comment. Fuck the cucks downvoting you

The man in the woods

woj
Reply to  The man in the woods

oh my god. thank you. you’re the best. you really took your time for us.

how good is the translation

About how long does it take to get all three endings for this game?

Very good! I love the art. Thank you!

I really enjoyed the game,is there any other games from this game’s creator?

can you do the do S na onee-san please, it is a really good game

Weren’t you the one spamming the F95 thread for comics and more updates?

this site shit only upload game from free website no $ spent from own pocket
and no Succubus covenant game are u zion? go f95 zone , rule34.us

Wow, this post belongs on r/choosingbeggars smh. The hemdom staff work to keep this site up and running to give us free games and a forum and all you can do is complain.