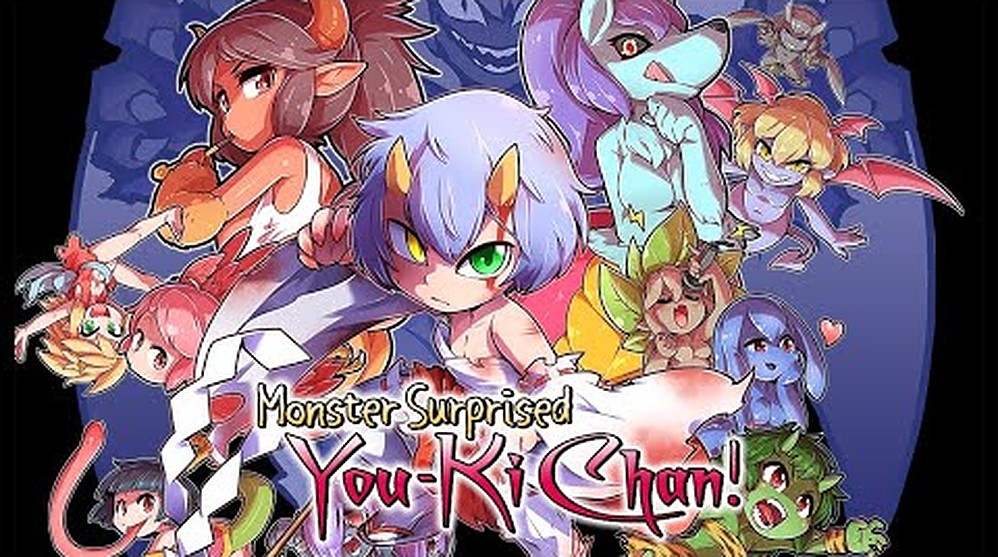 You play as a female god who is trying to save the human race from a monster girl invasion. Along the way, you will go up against a variety of monster girls. If caught, they will violate you! Each scene is filled with high-quality animations, and if there are multiple monster girls nearby, they will join in! Depending on which monster joins in, you will see a different scene. One might suck on your tits, while the other will eat you out. Some might plow you with their futa cock, some might not even be interested in you, and just go after the other monster girls!

Hentai scenes are not the only thing to appreciate though. The gameplay is surprisingly good. You’re not always fighting like in traditional side-scrolling beat ’em ups. Sometimes you need to escape from opponents or rush through a bunch of them in order to survive. There were a couple of times while playing I felt like I was re-playing the last level of Halo: Combat Evolved. There are 8 stages and each one has an intense boss battle. Try to use the environment to your advantage, as they can be used to inflict a large amount of damage. Climbing walls and the ceiling will be necessary at times, so be prepared to do some parkour!

This world is tough, but you’ll make friends along the way. Hopefully, with their help, you will be able to defeat the demon lord! However, losing doesn’t sound too bad either. 😉

Once the folder is extracted, click on you-kichan.exe to run the game
Clicking on startup.exe or player.exe will not work.

For those who are having troubles running the game or are experiencing crashes, below are a couple of things that might fix your problem:

1) You are missing important files to run the game:

The game is run on Pixel Game Maker MV, which requires the VC runtime and Direct X 9.0c to work. It can be installed here: https://bit.ly/38404Iw

2) Unzip the folder on your desktop

This is the error message I received when I first started the game. The solution is to extract the folder onto your desktop.

3) Your anti-virus is blocking the game

Try adding the game/game’s folder as an exception in your antivirus’ settings. Sometimes your antivirus will delete files automatically while extracting the .rar file.

Pixel Game Maker MV does not officially support anything before Windows 8. There is no official Mac or Linux build.

wait. female god. hmm. a little disappointing. but a male protagonist would be good. you know what I mean *wink*

You have to take what you can get sport. Can’t always get what you want in the world, unfortunately.

both links are down or deleted help

You can get this on Lewdninja .

Having played this game a while ago, i will say the game itself can be very challenging with limited lives, especially for the last boss. Some of the special finishers for bosses are very brutal/violent. If this is the R18+ version (i already have a version on my computer in english and have no disc space to redownload to see what version this is), i know there was also a giantess stage added that has some vore/unbirth themes that some people may not be a fan of, so be forewarned.

Also for the final boss ill give the hint to use your ultimate at the same time as the assisting characters so you don’t end up like me with a 20+ minute boss marathon.

Guys dont go to the 3rd boss with melee weapon…

Your Dad Who Went To Go Get Milk
Reply to  Connor

I used the axe dont listen to connor

Kurtis
Reply to  Your Dad Who Went To Go Get Milk

third boss is kicking my ass and i have the basic starter one, what am i missing?D:

Kurtis
Reply to  Your Dad Who Went To Go Get Milk

third boss is kicking my ass and i have the basic starter one, what am i missing? D:

If the third boss is the one I’m thinking of (Weird wolf lamia thing) you can pick up the floor you stand on and use that as a shield from her orb projectiles apparently. Last I recall, if she gets to somewhat low health you can throw it at her to activate a finisher and end the fight a little early. I remember that fight being an absolute bitch to beat though, so sorry I can’t offer any practical advice.

Can somebody help me, every time I try to run the game, it says ”The code execution cannot proceed because MSVCP120.dll was not found. Reinstalling the program may fix this problem.”

hi admin. I think I need to *wink* soon lol hahaha. can I request if you have new game to upload soon. I really am enjoying these 2d pixel side walk and reverse rape with moving animation rather than something like VN.
need something like these game, castle of temtation, Super Mamono Sisters or something similar mechanic. thanks in advance.

both links are down

Is there any way to play this on android my pc os bad ?

Your Dad Who Went To Go Get Milk

Femdomer
Reply to  Your Dad Who Went To Go Get Milk

What? There is a JoJo? Why I didn’t see him then?

I need that minotaur in my life.

Hey Guys. I need help. I think I missed something important. how come after I finished 4th stage it unlocked 6th stage? where is the 5th stage? need help.

Your Dad Who Went To Go Get Milk
Reply to  l.w

throw rocks as soon as she transitions out from a silhouette

I keep having crashes if I keep getting caught and smash escape too much.

Why is this game crashing so much ?

Does anyone else have problems reaching lvl 5?
With me, after lvl 4, it just goes directly to lvl 6.

How do I start the game.
I’m on the menu but there’s no option to start a new game or anything, I’ve downloaded all the needed things to launch the game I just can’t play it.
Any ideas what I’m doing wrong.