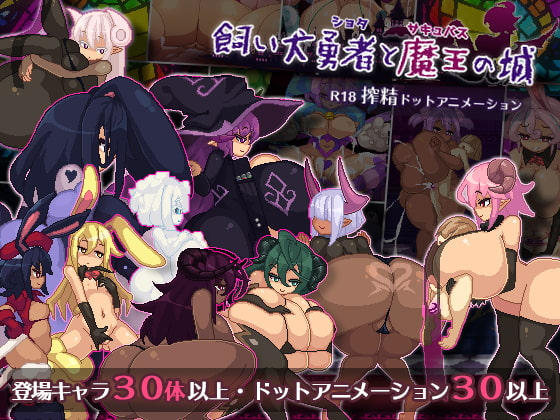 From the imagination of dieselmine–the guys who brought you such amazing games like Violated Hero series, Your Sweet House, Milking Farm, and Succubus Prison–comes a new game (literally, it just came out) in which a puppy-eared boy is captured by a deliciously busty succubus, who carries him around a castle filled with other lusty ladies eager to get some of his man-juice. Surprisingly, you play as the carrier succubus. She is responsible for this game of show-and-rape.

Is there going to be an english translation? Probably, considering the popularity and it just came out. The developer (dieselmine) has an english branch now and they did it with two of their most popular games. I wouldn’t be surprised if they made one for this too!

What about auto translators? AutoTranslator/UnityInjector/ReiPatcher does not work with it. If you’re able to figure out an auto translation that works, let me know and I’ll upload it.

What about fan translations? I did some digging and fan translators are already on it. However, Unity assets are obfuscated and text is separated into hundreds of non-sequential Mono files. It’s being worked on, but it may take longer wait than other translations to be released. I expect at least a couple of months, similar to the translation time it took for Milking Farm.

is there a gallery? I wasnt even aware you could access one.

A gallery in a glorified gallery? too meta for me man

Some dude
Reply to  cesarjunior233

There isn’t one. The game itself is basically it’s own gallery cause in order to move on in the game, you NEED to get milked by every girl.

I don’t mean to sound like an entitled ass. But does anyone else feel like this game is a massive cop out? I’m certain I’m missing something without the translation but so far as I know we know nothing about out MC, who he is, why he’s a hero, how he got captured, ect ect.

There is enough content in this game for it to have been milking farm 2 easily. Hero gets captured, taken to the castle and avoids enemies as he goes floor to floor. every floor in the game already has a voiced boss animation and a special area. Like they were supposed to be boss lairs or something. This doesn’t feel like a dieselmine game. It feels like the gallery mode from a dieselmine game.

Kinda feels like he got halfway through making milking farm 2 and just went “ehhh sod it.. make it a walking sim. Level design is too much effort.” This especially annoying as the animations are top notch and cater to a lot of fun kinks! It just feels like wasted potential.

Also just noticed this is nearly the same price as milking farm which was a full fledged game as opposed to a glorified gallery, plus it had fully voice acted CG’s alongside the animations.

I do get what you mean, and it’s certainly not nearly as interactive. Very much an interactive gallery than a game. Still very fun though and in my head, the “Hero” is definitely either one of the failed escapees from the milking farm (I recall something in MF about a plan for you being auctioned off), or a Luka-style hero that’s lost to the main succubus. I guess you need to build your own story around it.

Woohoo, another new release from Dieselmine! Can’t wait to try this out! Thanks Hemdom team for sharing, and a big thanks to the developer for creating this!

From what I’ve gathered you need to visit a certain number of girls on a floor before visiting the next floor. Your ultimate goal is to present your ‘catch’ to the queen(?) at the end of the first floor.

The terminals of the floors have special characters you transfer your catch and go to other areas, all of which are themed. If you stand still for a second with any of the characters, you can do an idle animation. Getting to the end of these themed areas (a straight walk away from the start) has a conclusive scene.

You can entire the purple doors and visit special characters. Why these characters are special I’m not sure, but their scenes work a little differently and tend to be more first-person.

Also, PRESS X TO OPEN THE MENU. I beat the entire game without realizing you could do that, so I have to do it all again. From the menu, you can save and load, as well as fast travel to characters you’ve already visited.

I’m pretty sure in every dialogue choice, it boils down to ‘yes’ on the left and ‘no’ on the right, or more accurately ‘interact with’ and ‘do not interact with’.

hi admin!
can we have “Anasteema Tea Party Plus”? really been waiting for it

Damn you’re a true hero ! I wanted to test it when I saw the lauch on his twitter ! Can’t wait for a translation !

Is the third floor available? I can’t seem to access it. When I go down the stairs I get two choices, one lets me stay on the floor and one sends me back to the 4th floor. after choosing to stay on the floor I take a step and then I get 2 more choices, one of which takes me back to the 4th floor and the other takes me to the menu.

Guide here just use google translate on it. http://sakuahe.blog.fc2.com/blog-entry-466.html
Long story short you need to get H scene with certain succu on each floor before you can descend without getting game over.

To save your game, press S to open menu. Then select save.

I keep getting a black screen after I interact with either of the first 2 demon girls. Help, anyone? Or just give me a save with all the teleports unlocked please… I don’t know what the issue is and I really want to play this since I’ve been a big fan of dieselmine’s pixel quality and animation.

Kind of bored with this one, which is a shame cause Dieselmine makes some good stuff. Maybe the next one will be more up my ally

The moment I saw the graphics I imediantly thought of Milking Farm. I cannot remember the last time I played a game with a female-protag but this game has me intrigued enough to give it a try. I am so glad there are so many fans working to translate this game into English already.

Another great game from diselmine. I have hope they do second part of this game

I will wait for the english version, but i tried the game, and is all the game has to offer just walking and choosing with who to do it?

wtf i just bought this lol

Murphy’s Law. At least you can say that you supported the developer.

Is there a way to fix the black screen glitch after the first succubus? Everytime I open the game and talk to the first girl, the screen blacks out and nothing responds. I would really like to see the rest of the game so if someone have a solution i would be super happy to know it. thanks!

So still no eng translation for this game ? Please Hemdom can you post it when it’s out ?

Well not my favorite dieselmine game(That goes to Milking/Succubus Farm), I really enjoyed the animation of this game. And it hits that checkbox of overly robust womanly features, not something I go for all the time but I still enjoy it none the less. Wished there was some other kinks in here but otherwise enjoyable. 5 stars.

Wonderful animations. English translation would only add to an already great program

Hi. I can never get the games to run properly. Could you do an image rip for both this game and “Your Sweet House ~Succubus Mama & Eldritch Mansion~”? That would be amazing.

So uh, I can’t move at the very beginning, I set my local to Japan, and I still can’t do anything at the start. Anyone know what to do?

Do you have any other controllers plugged into your computer? It seems to also pick up my 360 controller but is able to switch between inputs, but yours might not be.

You need to press Z to go through dialogue. After exhausting her dialogue you can then go outside.

Do you guys have sound ? I set all music on and max, but getting no sound TwT

Did you check your Volume Mixer?

So it’s a bug…Okay… Yeah i’ve check that all. Sometimes it happens, i have no sound on some games, and don’t really know why ^^’

sirpug the great
Reply to  Harija