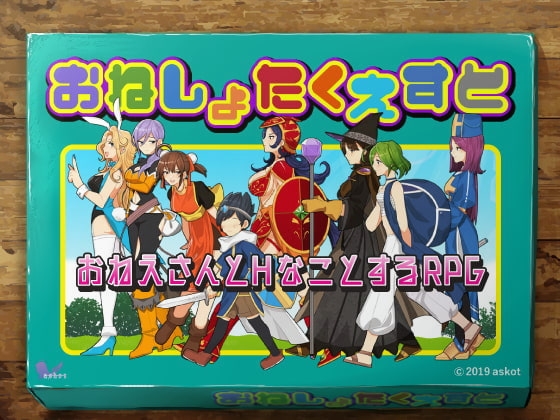 askot, the developer of the Level Drain series is back and teams up with various artists to make another game. This one focuses on a massive war between monsters and humans that has been going on for an eternity. Nobody has been able to get the upper hand. However, the human race start to gain more knowledge, wealth, writing skills and advanced tools. Large castles have been built where monsters dare not tread…

Soon, it seems that humans would take over the earth once and for all.

Until the Demon Lord Hermonte arrived! Their lord build a powerful army of loyal monsters, and begin their conquest. Countless heroes set out to defeat the Demon Lord, but none return. You play as a young human, an amateur who is one of the last heros left. Will you be able to defeat them?

This game came out not too long ago. So it will most likely take a couple of months (if not more) before we get a fan translation ?

This game is frustrating to play without japanese knowledge, as it is really hard to navigate, you get next to no easy information on where to go, and even grasping whats going on or how the game works is tricky. I highly recommend to wait for a translation, or at least wait until a savegame pops up to get the scenes, as a full blind playthrough is guaranteed to be a pain in the ass.

It reminds me of FF1 tbh, at least in terms of gameplay and guidance.
Yes, I am aware that its a long DQ reference, but still, same vibes.
If you played FF1, you’d feel the same pain, so its not really just japanese knowledge,
Its also just outdated game design lmao

Ok so I have no clue where at am suppose to go at the start. Cleared out all the treasure at the first dungeon and talked to everyone in the two towns you have access too and the guy at the checkpoint area up north wont let me through

The guy laying in the bed, yeah multiple times I think

…I didn’t realize there was a second set of stairs, fuck I am dumb

i talked with him and now? idk what im supposed to do… The guy dont let me in

Go back to the first dungeon and take out the first boss.

ty i saw it

how do i rewatch h scenes

,,this app can’t run on your pc” any suggestions?

wish we got even an mtl translation, the auto translator is messing up a bit

And what is the purpose of the bunny girl anyway