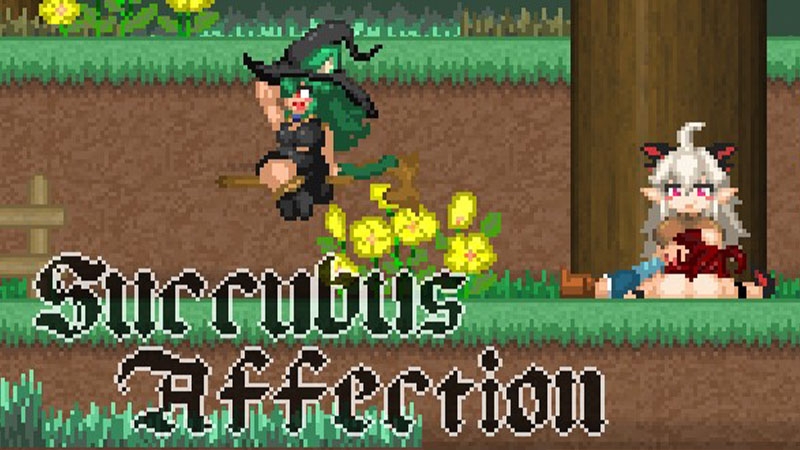 SuccubusAffection is a world where humans are overrun by monster girls. They quickly demolished civilizations and built their own all over the world. It seemed like only a matter of time before the human race was officially extinct.

Luckily, not all the monster girls are bad. There was one succubus named Iris. She is an adventurer traveling around the world exploring history, nature, and relics. Only one day, Iris and her friend Riagna found a basket in the shade near their village. It was a human baby boy! Humans are very rare beings that are said to have died long ago. Iris decided to pick up and raise that baby!

Ten years have passed since then. The baby, who was small enough to fit in a basket, has now grown into a lively, active and kind boy! He became a small brother to Iris, a very close friend of the village think of everyone like a family. Of course, the whole village & Iris are wrapped in happiness!

After some tough training, he is now ready to leave the village and go on adventures! I wonder what awaits him in this monster filled world!

Hey mate! the Submissive Hero Quest Chapter 1 got a new version with a lot of new enemy, would you like to upload a new version PLZ?

wish it would get an English translation team on it. no luck tho.

When i install this ( i have tried multiple times) my antivirus freaks out and deletes it, is this file safe to download?

i have this issue as well is there any way to fix this?

forest of the blue skin, also made by zell23

How to run in windowed mode?

ive the machine translation. thank you kindly for this one.

I have a little doubt

How do I save? Every time I tried to sleep my screen goes black screen.

Just reading Succubus Affection’s description was enough to put a smile on my face. I have been seeing this , and several other threads suggesting this game so I think this will be the next game I play. Thank you Hemdom for uploading this gem 🙂

there is a free patch to have the uncensored version of the game https://www.kaguragames.com/product/succubus-affection-patch/

Might be too late to ask for help with this, but after finishing the tutorial I’m basically stuck at the house and backyard, with no options to warp anywhere else and nowhere to go. How do I progress the game past the tutorial?

some reason it keeps downloading as a notepad instead of an actual file, help anyone?