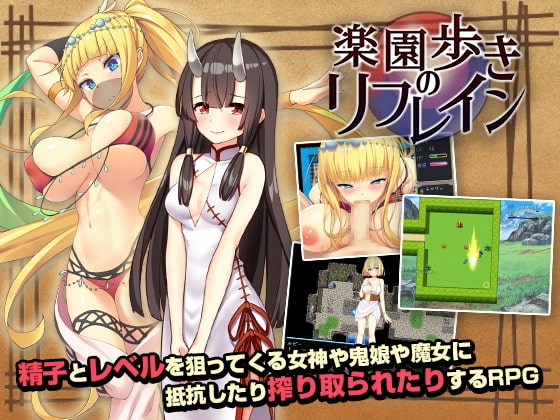 A man obtains the strength of a hero long sealed in a cave, and now angels and demons alike want his power! And they all know the same spell — Level Drain, which allows them to steal someone’s energy by making them cum.Will our hero be victorious against their sexual onslaught, or will he give it all up for pleasure…?

Now that he has the power of the hero, the protagonist aims to return to his village. Along the way, he’ll be assaulted by level-draining girls who want his strength for themselves… Searching for openings in battle, the girls know just how to tempt him into their traps… but can he resist and escape the level drain?

He has more than enough in him to put up a fight, but if you’re not careful, the pleasure may be too much to resist… and before long, his level’s so far gone that he can’t even defend himself…

The game may have a couple of bugs, as machine translations do that sometimes.
Thank you for understanding!

can share save file plz. machine translations are a painto go through

First time I’ve uploaded a save, but I think this should work? https://mega.nz/file/UA4XyJrb#-1QeG4rCRcOpuTbYwLDxInwwBC_zAgnejmqfk374Tf4

Thank you!! This game looks very fun and i’m super glad that it’s in english because level drain 1-3 was japanese and I love this type of content

Can some1 help me ? After defeated Ruby and Angle in blue church , i dont have any clue to go on , the NPC said their is no ship to Poison Island , and i found some NPC needs materials , but some of them cant be found in Castle , or just a very low drop rate material ??

I’m just going to give you the guide I followed to reach the true ending.
https://f95zone.to/threads/walking-through-paradise-refrain-final-yumenamakonn.57448/page-3#post-3877758

The title implies this is a sequel. Is it?

Hi, can someone explain what to do when part of the text is outside the frame?

Thanks! Where did you get this machine translation from? F95? ULMF? Yourself?

@Drunkenpowers has been creating english translations for us recently. Deserves all the credit for these great game finds too 🙂

Does anybody know where to get disease firefly??

Thank you for the MTL! Going to play this now. Hemdom, I have to ask. Who is the girl on the throne that you use as your header??

It’s from an artist named Gooak. It’s actually a deleted post, so I can’t provide the source but I can provide the artist page. You will notice the style is very similar 😀

Anyone know what to do after goddess Ruby fight?

Well , i come back to my first house and fight the first girl again , then i go to the “blue church” , and go downstair and fight the angel again
After this i don’t know what to do anymore

is there any foot scene in there ?

I don’t think so. I have finished all bosses fights and haven’t found any foot scene.

How do I get past the guy blocking red city?

Judging from the 11 month silence, nope. A shame, too, as I have the same preference. At least hentai-sharing.net also has 1.02 and untranslated at that.