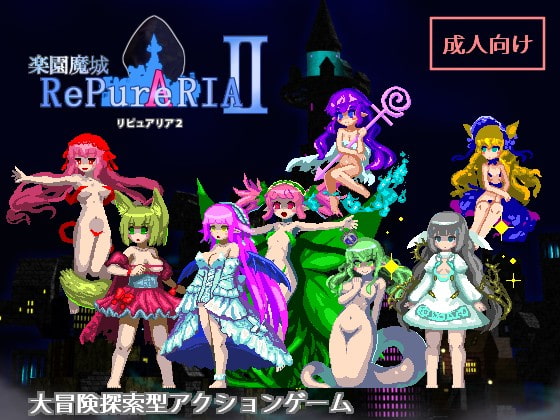 House of Black Dream Fantasies is back with the sequel to the original Paradise Fortress of RePure Aria! The game is not complete yet, but I was lucky to get us a early access version for you perverts. This version is estimated as 70~80% until final completion.

This is basically an H castlevania-like game, but it is one of those rare kinds where you may come for H, but stay for the game, as actual game mechanics, story and presentation are just way to enjoyable to play, regardless of H content. But it is not without H too, very nice pixel-art animated scenes are making it a very enjoyable in that sense too. I would recommend to start from first part though, to catch on with kokoro-warming story and not be left out in the dark. The story is independent of the previous work but the characters and world settings have been carried over into this work. (Can be enjoyed as a standalone product or even more so as a sequel.)

How can i put this in English?

Why is this the 1.0 version? It’s not the latest version of the game. Any idea when you plan to upload the most recent version?

Original was absolutely fantastic, the pseudo-sequel was pretty good too. I’m very keen for the full version of this to come out. Never have such extreme fetishes seemed so palatable and innocent (referring to the boss fights mostly).

Anyone know how to apply the partial translation patch linked?

is the full version gonna be put on here

How is the English translation of this game?

Has anyone found an English translation for the first game in the series?

Played it a long time ago, although the translation was incomplete, sadly