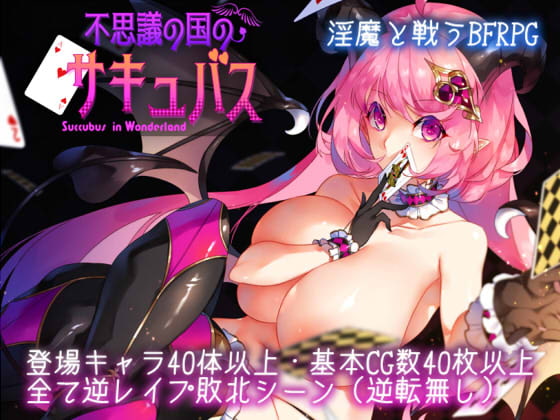 A young man falls down a well and ends up in a whole new world. Before him sprawled a huge castle full of busty succubi! Thankfully, a succubus princess decides to help him find his way back home. It won’t be easy, as most succubi just want his sperm!

The newest game rides on themes of the previously great Lust Grimm and Lust Friend. This time into the world of Alice in Wonderland corrupted by Succubus. Unlike Lust Grimm, each enemy you meet is more developed. Similar to Lust Friend, there are additional interactions that happen outside of combat. Including multiple CGs, and the opportunity to have them join your adventure. Considering there are 40+ enemies with at least 2 CGs, it’s pretty impressive.

UPDATE: Green Thoughts created a thread on ULMF, taking on the task to create an English version. Just recently… he announced that the final patch has been made and that everything has been translated.

I’ve gone ahead and applied the translation to the latest version of the game. All you have to do is go ahead and download it! No manual work is needed.

Hey Hemdomblog! I know it doesn’t have anything to do with this game but I didn’t know where to write it so I decided to write it here, I would be very happy if you would add different categories like “jrpg / battleground” where when we click we see games of this spesific category because like that everything is a mess, we suffer more to find our spesific taste, I know there are tags already but these tags are not really helpful, we need more like game categories, for example if we click to “jrpg” category we see jrpg games like “The Only Man On Earth” or if we click to “battlefuck” category we see games that have battlefucks, thanks! You do a good job, honestly nobody could think that some random guy around the world would open a very spesific site just to please a very spesific audience

Sorry, Im new to the website, but I suppose that since this game just got posted, there is no way to translate it into english, right? Excuse my bad english

The
Reply to  Anonymous

The game is already translated if that’s what you’re asking, all you have to do is download it. And you’re English is not bad at all, be more confident in yourself.

Last edited 1 year ago by The
16
Reply

Pika
Reply to  The

I think he was asking 1 year ago, not sure the game was translated at this point.

Thank you anyway for answering him, always great to see people taking of their time to answer and trying to help people! Good job to you!

Thank you anyway for thanking him for answering him, it always brightens my day to see people being grateful for others being helpful, really keeps the world going. Good job to you!

I must thank you for thanking them for thanking ‘pika’ who answered him. I also love seeing people be this kind and sociable! Keep doing what you’re doing! Good job to you!

Thank you all for being so wholesome lol

yade yade ya
Reply to  NKDL

thank you for seeing the wholesomeness in this unexpected conversation

hahaha i see, Although it is not the most correct, we are the healthiest in these aspects

Please update to the latest version

A person who wants to lose to Succubuses
Overall Rating :

The game has now been updated to v2.06 while the current download link is for v1.07
Please consider updating if you can. Many of us are eagerly waiting 🙂

I think links are dead

Lust Grimm is so good so I’m looking forward to this. This is my favorite type of game with succubus ladies haha. Thank you very much!

There’s a (unofficial) translation available, although I had to do some light digging on ULMF. You also need to unpack the game using the latest version of EnigmaVBUnpacker.
Translation’s pretty basic, like google translate levels of basic, but it’s enough to understand what’s going on.

Another anon
Reply to  Benevolent Guide

Benevolent Guide
Reply to  Another anon

Translation
You’ll need to log in, but it’s pretty easy to make an account, especially with something like 10minutemail.
You’ll need to unpack it with Enigma Virtual Box Unpacker
Just put the EXE with the game’s exe, and “unpack it” or whatever.
Once you do that, go in %DEFAULT FOLDERS%, change the folder’s name like remove the %’s, and put the data and js in the www folder. Load the EXE from the folder you renamed, and you probably should be good.

I never found a %default folders% after unpacking. But I have done the steps before as stated on the website. Do you have any idea why?

I just realized that from the very beginning I never had an original (from the direct download) data or js folder. Sorry for the bother

I did it and it didn’t work

Long time lurker. Thanks for everything you do for the community 🙂
Mega link seems down & google link is busy. Hopefully will be fixed soon.

there is a gallery room below the starting area. i’m playing without a translation and there apears to be a place for a code, but no idea what it would be.

After spotting a pretty decent English patch of Succubus in Wonderland, I finally took the dive to play through it. Took me roughly 17 hours to get everything in the recollection room. A pretty solid game. Plus most of the succubi have pretty big boobs, which is always a win-win. 5 stars.

can you post the link for it these ones are dead

Thank you hemdom! Ive been looking forward to playing this in english.

does anyone have a full save for this game?

I can already tell this game will be a must-play. I hope it will get a full English translation soon.

needs to be updated

Hello, could you update the game to the most recent version?

When I lose a touch event, I’m in an endless loop of losing, what do I do? Is it supposed to softlock?

Hold the UP arrow after dialogue happens, wish they would have translated that part at the top.

how do you find the sucubus bells?

How to escape the third scene (moving) of each enemy in the gallery, because I’m block and every time I have to restart the game x)

hold up arrow key while going through dialogue