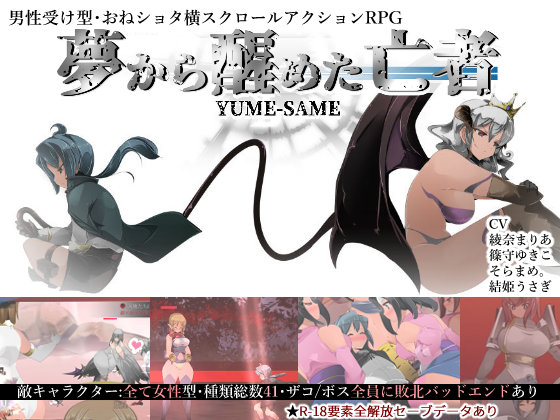 When Yume-same was first announced, there was a lot of hype. Every Excessm game has high expectations, so I’m not suprised. However, a lot of people were hyped for the English release, which was promised shortly after. Unfortunately, there was an issue with translation, and is still not available to this day. Well the community does not want to wait any longer, so they created their own version.

If you’re unfamiliar with the story, I’ll give a brief description. Keep in mind this is a One-syota game, so it follows the lore of the series. If you haven’t played the older games, I highly recommend it!

In Yume-same, the succubus queen has been defeated and sealed within the sword of a powerful warrior. Peace is now here, and it is believed to be over. Years later, the warrior is now a king and has a child. The succubus queen needs to escape! She ends up tricking the warriors son into releasing the seal, and the world goes into full out war. He needs to fix this mess before the whole world goes into chaos!

Expect to see a young male protagonist facing older girls who come at you with tons of naughty attacks! However, this game does feature monster girls, which isn’t that common with the other one syota games. Weave and dodge between eechi attacks or you’ll get gang banged all day long!

This is a machine translation!
We will update the post once a official or fan made version is available.

I’m having the same problem

How do I switch it to “AutoTranslation”?

You cannot switch. Some parts are simply “AutoTranslated” and others translated by “Alicemagic”.

But an official translation should be released soon.

Well I know what I’m spending my evening doing. Thanks a tonne for this! Machine translation is still better than no translation! Especially when I couldn’t get a quarter of the way into the game before ^_^

Hey im not sure if this is just me but for some reason, some of the defeat scenes just refuse to load, for example the imp scene will not load yet the angel ones do.

The game is pretty good though, the controls are solid and the story seems decent.

its the translation of the game thats causing this, for some reason this version just doesnt play some scenes at all

Crashing on Weapon levelup. Cleared like 50% of the game with lvl1 weps but need to upgrade them somehow.

Having an issue now though. For whatever reason I can’t upgrade my weapon all of a sudden 🙁

I am not having this issue and sadly have no idea what could be the issue.did you import a save? This is a slightly older version than currently released so that may cause issues.

I started fresh and at first I could level up my weapons and skills just fine. after like the first boss it just started giving me this error

I am having this error too, but simply clicking anywhere on the screen seems to “ignore” it and send you to the upgrade screen.

So for those wondering this was found prepatched with no mention of where they got it ,and seems only some defeat scenes play properly namely story related ones seem to work.on the plus side everything else seems to work well.

I cannot Play the defeat scenes, how can i fix this?

How can I equip the Sword ? I know you have to assemble the Twin Blades for that but how you do that ?

I know this comment is quite late, but I’ve noticed that for some scenes the only view you get is extremely zoomed in on the animation and you can’t actually make out what’s happening (I’ve had this happen with the Werewolf and Giant Soldiers). Is that intentional? Or is there a way to actually, y’know, see what’s going on?
Also, is there any way to go and view enemy defeat scenes without actually having to seek them out in the world? I like the scenes with the Giant Soldiers but the area they spawn in is dark, which I’m not so big a fan of.

Great game, i love this too much!

This is a report on the English translation of “YUMESAME”.
Currently, game data is being passed to DLsite’s translation staff.
The staff translates it into English based on it.
However, because the translation staff is busy,
It is unclear how long it will take.
It takes time and I am sorry for overseas users.”

Eng version is not on dlsite yet.
Hopefully its comes this year.

Hey. I dont know how to advance in the game after flame cave. I talk with o old guy and after that I dont know what to do. Is the game complete?

Can I get a synopsis of the plot of the other One-syota games?

..sees “machine translation”… not sure i should be happy or sad..

For a machine translation it is actually decent, I usually insta quit because of the bad gramma.
I don’t know if is pure luck the translation is decent (I doubt this) or because they proof read and edited it to make sense, but certainly worth your time.

You, sir, are awesome.

Hey hey, just checked it out, I’m wondering if there’s any way to switch from fullscreen to windowed. Other than that it’s all working out so far (not a terrible mtl either, which is a plus) 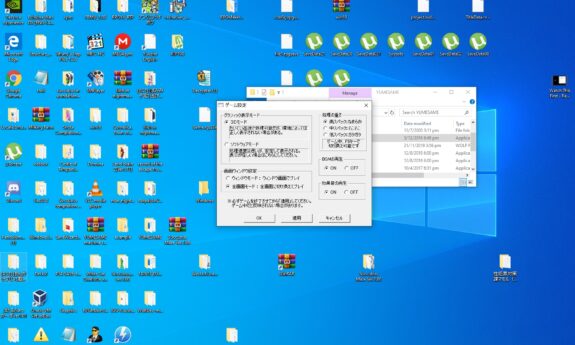 For some reason the alicemagic translated defeat scenes refuse to load, any way to fix this??

Hey man> In the article, you recommended one-syouta games but I have no idea where to start. Can you give me a list of the games that have an english translation ordered by release? Thanks!

Here are the games by release

All of them are available on the hemdomblog, and can be found here: https://www.hemdomblog.com/tag/excessm

Unable to extract the .rar file, any help?

try extracting it with newer version of WinRar or 7zip