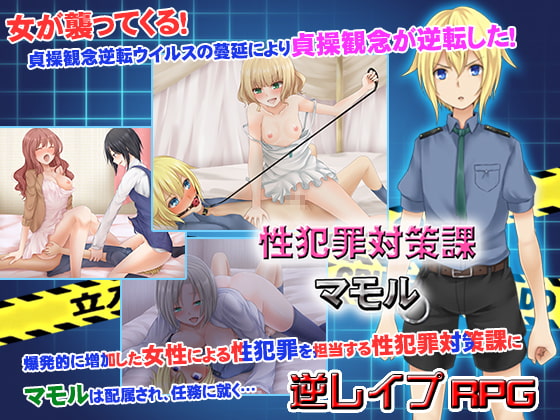 In a world where the concept of chastity has been reversed by a virus, the sexual morals of men and women have switched places! Sex offences by women are on the rise, running absolutely out of control. Special countermeasures must be taken to curb the trend and thus, the young Mamoru is transferred to the Anti Sex Crime Department…

A certain scientist developed a virus that reverses the sexual morals of men and women, flipping the table on the concept of chastity and lust.

Unfortunately, this virus ended up being spread all over the world and… As a result, female violation of males, reverse r*pe, confinement, etc the number of such cases suddenly exploded and grow ever more! In order to reduce the number of female committed sexual offenses, the government sets up special countermeasures. That is the “Anti Sex Crime Department”.

I’m having the “failed to load image” error right at the first battle. What to do?

This issue has been fixed. Try the download link again for patched version 🙂

Hi,if anybody know the recollection codes of the game…

I think, it might be, because of the translation. The changed data also changed code accessing various files like pngs written in japanese language. I think that, because you can either fight with black agents or the blond woman in th first fight. In both cases it says actor_(something in english)_wasn’t found. Looking inside www folder for mentioned poses png they are actually written in japanese.

So do you know what to do about it? Do you know how to fix it or not?

Yes, just do a backup of the folder “sv actors” in path (game folder)\www\img\sv_actors and rename the files inside accordingly to what the error spits out. For example Karin (blond girl) is called in the original file as カリン wich is the katakana form of the name (just do google translate to make sure). Rename it in “Karin.png” and the game is able to access the sprite now. At least what i tested out i was able to access the first sex scene by that.

It does not work however for the black guys in uniforms. I guess its because of the translated %sign … have no soution for that yet. Just dodge them (not easy but doable). I just beat her by now. We’ll see if that solution works for whole playthrough. If not …well 2 solutions:
first if your goal are the sex scenes look around for game save files from other people. Or ask Hemdom kindly in discord to maybe reup the original japanese game (or another mashine translation) on this site.

Can somebody point me to the recollection room? I played through the game and got the code (96969696 btw) but I somehow can’t find the room itself.

It is the last option in the main menu.
It is not a quit button as I first thought myself.

Is this a sequal to another game with exactly the same story beats?

None of the battle with people are working, and no images that would apply to this game can be found.(ie. base rpgmaker images are only found in sv_enemies and sv_actors)

So the game works just fine, but the combat is a hot piece of garbage in my opinion.
Just reached the 2nd main boss, and the amount of stun and confusion is stupid.
(I even cheated to get money and equip and I am still getting locked in an infinite loop of death)

All in all, it has decent H, but shitty mechanics.

Thanks for sharing this game.

For me the text gets cutoff when it doesn’t fit in the dialogue box.
For Oneshota Quest, there was a cliploger window that I could read the full text in.
Is there a workaround like that for this game?

Actually almost all the text is short so it doesn’t really matter.
Thanks again for the upload.