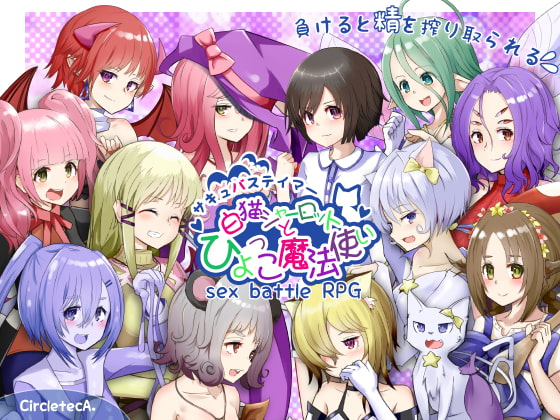 The story starts with you, Rachel and Ilya who are amateur warriors, under the teaching of master Fogg. The regular monsters in this world are starting to become relatively easy to handle. The human race is adapting quite well to these creatures, but there is one that’s more powerful than them all. It’s Succubus! Physical and magical damage doesn’t work on them. The only way to defeat a succubus, is through sexual arousal!

Frogg was trying his best to teach them properly, but they don’t take it seriously. Progress was very slow. Until one day, the worst possible outcome happened! Succubi attack your house and you must defend yourselves! It’ll take all of you to handle them.

Luckily you did but it came with a cost. Master Fogg didn’t survive ;( . He was defeated by a really powerful succubus named Dorothy. With emotions running high, all of you swear to avenge him. To get to Dorothy, you must defeat her following. Will you be able to resist your temptations? Or succumb to your euphoria?

Oh nice, it’s V4.1 and everything. I was looking for it the other day for the new translation and couldn’t find it. Greatly appreciated!

Glad you enjoyed it 🙂

Good game) But its translation into English is not complete.
Names are skipped and some dialogues. And even some scenes from special or secret.

Does anyone know what to do with the herbs? I assume they can be crafted into potions but idk where I can do so.

u need to tame the sucubuss in the laboratory, she do alchemy at your home

Ahhh I see now! Thanks for the tip!

Anyone have a guide

Had to remove your image because it was too big. But dw I saw it.

That error message you received means you didn’t install the correct RTP for RPG Maker. Do you have all of them installed? Here is what I found on a forum.

Hello, I have the same Problem. I installed the RPG-Maker VX Ace RTP from the link, but it didnt change the problem.

Can you guys stop using anonfile? It always has a virus on it.

﻿What virus? The only issue I’ve ever had with anonfile is an occasional popup on mobile. Other than that, it’s a good anonymous file hosting service with a fast download speed.

How to change mc clothes at the gallery

How do I get this game to work I’ve downloaded the RPG maker and did the setup but the game’s still saying I dont have it?

You need to install RPG Maker VX… Not RPG Maker VX Ace
http://www.rpgmakerweb.com/download/additional/run-time-packages
It’s the one in the middle

Ok thank you that worked except its now saying TRGSSX.dll. Any idea on how to fix this one?

Nevermind I think I just tried running it too early. Thanks for all your help.

so, can you actually tame succubi? if so…how?

You can tame the bosses by beating them.