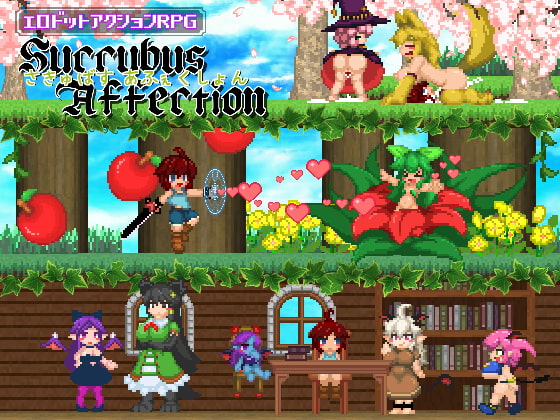 SuccubusAffection is a world where humans are overrun by monster girls. They quickly demolished civilizations and built their own all over the world. It seemed like only a matter of time before the human race was officially extinct.

Luckily, not all the monster girls are bad. There was one succubus named Iris. She is an adventurer traveling around the world exploring history, nature, and relics. Only one day, Iris and her friend Riagna found a basket in the shade near their village. It was a human baby boy! Humans are very rare beings that are said to have died long ago. Iris decided to pick up and raise that baby!

Ten years have passed since then. The baby, who was small enough to fit in a basket, has now grown into a lively, active and kind boy! He became a small brother to Iris, a very close friend of the village think of everyone like a family. Of course, the whole village & Iris are wrapped in happiness!

After some tough training, he is now ready to leave the village and go on adventures! I wonder what awaits him in this monster filled world!

This game is developed by Zell, the creator of The Forest Of The Blueskin. If you enjoy this game, I highly recommend checking out his other game!

Hey thanks for the quick upload, you’re fast!

Just a quick note though the game is actually being developed by Maken Ansala while Zell23 is being comissioned for the art and animations. Its easy to get confused since its Zell’s signature style, but its not just Zell working on this game.

As it turns out, the artist for the CG scenes is apparently not Zell. In a gallery for the CG scenes I uploaded to exhentai, someone tagged “yamanashi tadashi,” and with a quick google search, I found their Twitter. (@PType89) I’m almost positive this is the artist of the CG scenes. I believe they’re credited in the game somewhere.

So an English version was just released, do you think we can get that soon?

Can someone help me out? I have no idea how to get out of the house after the tutorial. What do I have to do? Also: How do you save in this game?

same issue i cant seem to find a way to progress, i pick vegetables and talk to the girl next to them making the quest markers on the left go away but no new options appear and sleeping just resets everything and the same 2 quests appear again

You need to go back into the forest. To do that, leave the house on the right and advance through the blue marker. From there, go left until you see another blue marker. Teleport again and you’ll have to defeat the monster girls there and then go deeper in the forest.

i cant figure out how to save

It auto-saves when you load into a new area and when you sleep.

Thank you very much for what you are doing!

i was just about to say that this art style looks eerily similar to the one used in FoBS. i love this guys work. can’t wait for an english translation

woooooow … thank you so much for the quick upload. You are the best 😉

You’re very welcome! I don’t want to take all the credit tho, I’ve got some help from the hemdom team as well 🙂

Is it possible to add Succubus Princess (Tristya) into this site? Apparently its translated

If you want to request games, use the forum or I’ll most likely forget.
https://hemdomblog.com/forum/game-request/

can we get a full save

I hope this does not seem too arrogant. But please also pay attention to such games as: Succubus, School, and Five Days, Record of the Escape from Succubus Castle, Taima no Hibiki.

If you want to request games, use the forum or I’ll most likely forget.
https://hemdomblog.com/forum/game-request/

I need a lil help.
They game won’t turn on it the start it loads to 2% than crashes.
Any idea how to fix this issue?

I’m having the same issue, I could really use some help. On my end, it doesn’t crash, it just stays at 2% indeffinitely

The calm/ending theme is amazing

Hi, just a quick question, i dont understand shit about japanese (also sorry if my english is bad, it isn’t my first language), so how do i progress in the game? I did go back at the forest where the slimes are, but i cant find where to go next

Hello, thanks for the upload mate :), do someone knows where to go after the castle boss?

Just a quick lil thing, uhm, the monstergirls I have keep turning on me, like I can go, bond with them, leave the screen, come back, and they’re back to attacking me again, even the ones I’ve had at bond levels of 9 or more have started to turn on me, why is this happening?

check and see if you equipped an accessory that looks like cat ears. if you did take it off because that accessory causes all bonded girls to attack you as if they weren’t bonded (for training purposes if you are at the endgame portion of the game or if you would like to fight them again)

Cool down,dude..Just change the difficulty and utilize combo using skill slot..Oh,and also pay attention to the boss’s attack patterns since it will change after (you know what) once..

Only works after you defeated the 3rd boss (golden fox) i guess..Head to bed and sleep,make sure the sleep counter is 100/100
Wake up,find Iris (your sister) mast*rb*te in front of her and walk around ’til sleep counter hits 100/100 the go to sleep.. You will encounter an event where you woke up at night and had her jerk you off..