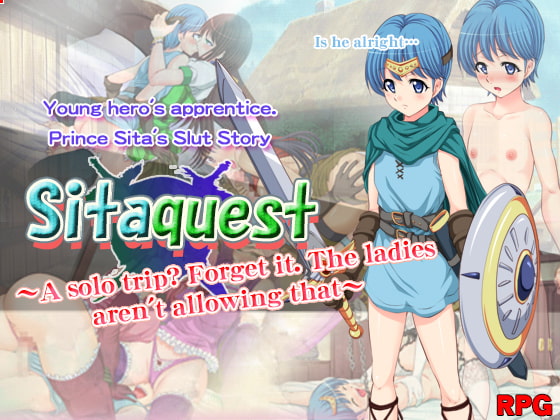 Sitaquest is a fantasy RPG about a coming-of-age prince named Sita. His father — the King — calls upon Sita and reveals to him a family tradition: he is obligated to take part in a pilgrimage, during which he will have to make a prayer at a place designated by the shrine maiden of the magic capital Preretia. Thus, with a bodyguard by his side, Sita embarks on his adventure.

The game is primarily a dungeon crawler. Sita will be given various tasks, which will require him to brave through areas riddled with monsters. Enemies can run into Sita or surprise him when he interacts with objects, which initiates a turn-based battle. The player has full control over Sita’s actions, while his companions act on their own.

I’m already blocked at the first maze: “Upon inspecting these blocked roads..”

About two squares away from that grass patch you can walk up even though you cant see it.

One of the tiles nearby let you walk upwards into seemingly nothing, its a secret path to the chest. The rest of the tutorial unlocks after you open the chest.

look at this dude.

bruh this dude has granny pant’s.

Hemdom
Author
Reply to  look at this dude.

Bad game, great idea (forced harem etc, a funny and creative idea) but executing is just bad, it’s very amator… Dungeons are weird you can literally see they are nothing more than rpgmaker assets and this game doesn’t even have a plot, I don’t think people play games like this only to fap, at least I myself play for the plot and I didn’t like it