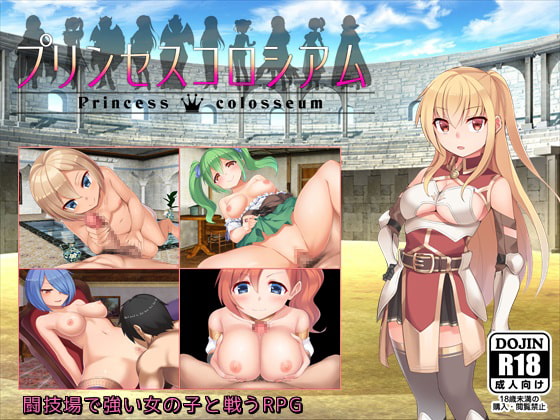 The kingdom of Rusawin is one of the very few places in the world run by strong women. It’s well known for it’s Colosseum, where the strong and victorious claim their rewards. Beautiful and powerful princesses await any challengers. Are you willing to willing to give it a shot? It’s not like you would mind losing 😉

In this RPG, it’s all about training up the male protagonist and card battling. Fight against women who all look down on men. Seduce and sexually harass them during battle or out. In a country dominated by women, endure verbal and physical abuse as you hone your skills, and seek victory in the Colosseum.

Hey guys DataZu back to give you guys some good news the forum of this link has a 100% save https://ulmf.org/threads/furamusofuto-purinsesukoroshiamu-princess-colosseum-rj255616.13659/ give a + if this comment help out

Is there a gellery in this game? if there is can you expalin how to get to it as obviously me and most other people dont have the slighest clue as we cant read japanese lol.

Will the translator work on this game? The game looks really good but without English it is kinda lost on me

I couldn’t get the translator to work. Anyone had any luck?

After the armour succubus if you lose to her you will be force to New game plus you will keep your gear but not your stats and money the armour succubus has huge defs stat and does normal damage 2 you… You can grind every day for stats, money, equipment but be warned you have a certain amount of days to beat the game before you lose and have to new game plus which again makes you lose all your stats game is really hard to beat without the translations of the game anyone with a save file do share

A 2.0 version got released for this game, any chance of this getting updated?

For some reason when i try to run the game i get a small white text box with some wirrd letters and a ton of ?????? please help

Also sometimes if your system locale isn’t set to Japan, the game will not run. Try to change that as well and see if it will run afterwards.

will that change change the operating language to japanese? cause i can’t read japanese.

Have you tried the video game troubleshooter? https://www.hemdomblog.com///p-faq-html

Beware the fight with the fully armored warrior, it brings you to some sort of selection screen where if you save (very first option) you are stuck there and either have to load up another save file or start over

Any news on this game getting an official or fan translation? This game looks too good not to play.

The link takes you to a chrome extension install

It only happens when not using ad block