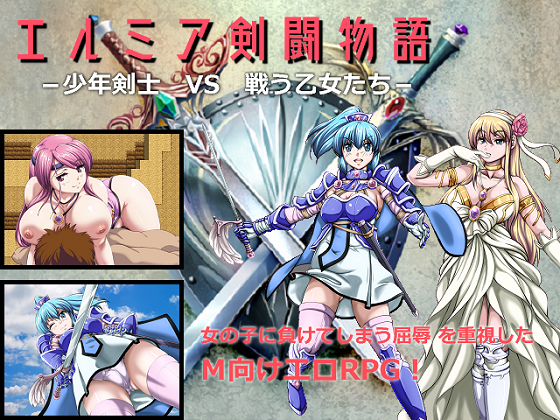 The protagonist who is a upcoming swordsman lives in a certain village making a living by patrolling. One day, he is visited by a girl named Sherry who travels around the world for the purpose of becoming a swordswoman. When he is asked by Sherry to have a practice match, he underestimates her strength partly because she is a girl.Once the tips of their swords are pointed to each other, he soon realizes that he was wrong. He succumbs to her art of sword and swallows his pride to admit his defeat.

He burns in the flame of fighting spirit. When he is informed that Sherry will participate
in the kingdom’s tournament, he makes up his mind to take a revenge…

How do you start the tournament? I go into the waiting room but there’s nothing to interact with and nothing happens

How do you make the tournament start?

You have to sleep in the inn

Is this the really poorly translated one?

How I wish this one would get a proper translation

I love this game

Link no longer work since the site is dead

RIP Nopy, you were a good site.

How do I finish the sewer task? (“Investigation of underground task)

This looks like a very fun game but it has the worst machine translation I have seen so far. I tried playing this but the text was so atrocious that it broke any imersion in the game. This game is worth keeping an eye on for when it gets a good translation.