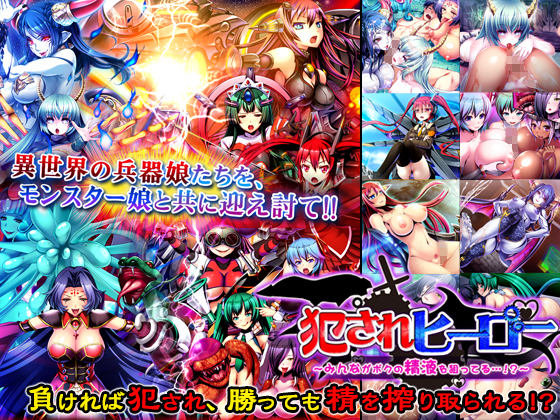 You are Chrono, the Hero of humankind. For ages, the world was divided between Humans and Monmusu (Monster Girls), with Heroes like yourself acting in-between to keep the tenuous peace. Suddenly, a new threat appears: a race of powerful Machine Girls who are attempting to take over. You were almost defeated but was rescued by a Monmusu Demon Queen, Lizesnea. She decides to form an alliance with you to defeat the new invading threat but only on one condition- you become her personal semen slave in the meantime…

The links for the game and the patch is provided below. It’s been a few years since the last Violated Hero entry by Dieselmine so if you are interested in such games, do think of purchasing and supporting them through their official product website!

Anyone? Has this been fully translated or it just partial

how do i use the english patch?

how do i use the english patch

The link is down for downloading the game

May I ask if there is a save file?

Every game in this series has been wonderful. I’ve had gripes here and there with content and gameplay differences with some of the games, but overall the artwork is exceptional, and the gameplay is clean and paced well enough to not bore me. I’m excited to revisit these games now that they all have full English translations. This particular addition to the series was nigh impossible to follow with automatic machine translation.

I am sad to see that Dieselmine hasn’t release another VH in the years since this one – I assume they’ve packed up this series and moved onto one of their other IPs, but luckily the market for femdom/monstergirl games has really expanded since this series started.

Hi the link is down, can we have a now link active please ? I want to download the game

i just found an error, the ev03c.png in the bgimage is having some problems it turns blank when i went through that scene anyway to fix it?

Is it all english?

Anyone know how to get a save full?